During the pre-draft press conference the Chargers general manager Tom Telesco said that the team doesn’t necessarily draft based on team needs. Well turns out that is exactly what it seemed like they did, whether that was a coincidence or not remains irrelevant. The four biggest needs were the very same positions taken in the top four rounds. Not only did Tom Telesco do a great job of filling these need’s, he also did a great job making sure the team got great value with the pick’s he had to work with.

There was a ton of experts and fans alike calling for a defensive tackle in the first which they got. However there was also a giant portion of the fan base chattering for a safety with the 28th pick, namely Nasir Adderley. Not only was the team able to land Adderley, but they were able to land him in the second round with the 60th overall pick. Needless to say that when both experts and fans speculate him going late in the first round only to be landed at the end of the second, that is considered great value and possibly a steal depending on his immediate impact. Standing at 6’0” 206 pound’s ,Adderley draws comparisons to Cincinnati Bengals safety Jesse Bates. Bates in his rookie year last year graded out as the second best rookie safety only behind the Chargers very own Derwin James. Adderley had four interception and 7 pass break ups with 87 tackle in his final year at Delaware. Some experts have said that his instincts are inconsistent and that he may be better off being moved to corner and seems to play better at the safety position while in single high coverage. Well it just so happens that single high free safety is exactly what the Chargers love to run. Having a reliable safety over the top will allow Gus Bradley to be more creative with Derwin James. Last year at the begging of the season James was a monster on the blitz however over time it proved that Jahleel Addae was incompetent and couldn’t be trusted on an island in coverage so James was hardly asked to blitz after. With Adderley however you bring in a more pure free safety who will not only free up James to do anything asked of him, it will also probably turn into ore interceptions for the defense and less big passing chunk play’s given up. I think nasty Nas will fit right in with the self-proclaimed “jackboyz” and prove to be a perfect fit and second round steal as I have no doubt he will be a pro bowler at some point in his career.

In the fourth round the team landed another Notre Dame star and linebacker Drue Tranquill. While I was hoping the team would select a linebacker earlier in the draft and possibly Mack Wilson from Alabama once I saw he began to slide, I am fairly happy with how thing’s turned out. Tranquill stands at 6’2” 235 pounds and put up some elite numbers at the combine. He ran a 4.57 fourth yard dash along with a very impressive 31 reps of 225 on the bench press and a 37.5 inch vertical. The strength is very impressive for a guy who is a converted oversized safety. Tranquill had suffered two separate ACL injuries, one on each knee. One of which came on a bone head celebration. If not for the knee injuries there is no doubt in my mind that he would have been a second round selection instead of a fourth and part of that has to due with his highly praised character mixed with combine numbers. Tranquill is a former two time team captain for the fighting Irish along with the fact he became a team captain during the senior bowl as he very quickly won over teammates from all over the NCAA. The Chargers relish players with high character marks and rightfully so as it creates a great locker room environment. The team drafted another hybrid linebacker that was converted from the safety position last year also in the fourth in Kyzir White. It will be interesting to see how the team mixes and matches its linebackers as the team has also brought in veteran Thomas Davis. I suspect the team didn’t want a few injuries to the linebacker’s core to derail a run at the superbowl for a second year in a row. It is yet to be seen what they have in store for Tranquill unlike Adderley who will likely be penciled in as the starter at free safety from day one. I would say that regardless of what the team has planned for him I see his floor as the future special team’s captain. However I would like to say his ceiling is that of a starting outside linebacker but if im playing it safe and taking a more realistic approach I would say the ceiling is that of a similar role we saw Adrian Phillips in, as a dime package coverage linebacker.

Overall I was happy with how thing’s shook out for the Chargers. The team did a great job addressing and filling hole and needs on the current roster. I’m also happy with the undrafted rookies that signed post draft with the team as I feel a few of them have a real shot to make the team. More to come about the undrafted free agents in my next article. 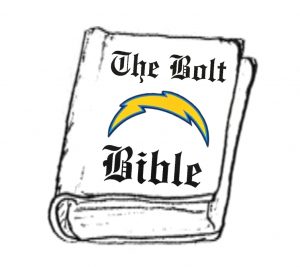 Voice of the enemy